Have you ever wondered of how would it feel if you couldn’t see well, taste well, hear well….? From my perspective, that would be an extreme challenge to deal with, especially because I’ve been lucky enough to experience all my senses so far. But have any of you ever wondered how you’d feel if you couldn’t smell properly? Or at least, not being able to easily identify basic smells? This condition is called Anosmia, which is identified as the inability to perceive smell. 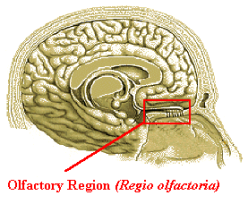 According to MedIndia.net, there are two kind of loss of the sense of smell: 1) hyposimia, when the loss is partial and 2) ‘specific anosmia’, when people can’t smell a particular odor – which is usually genetically-related.

But what implications could this loss have on people? Amongst the most common consequences we can mention the patients’ complain of consequently losing their sense of taste (ageusia) and of not enjoying food as much as they did before. ‘They can perceive saly, sweet, sour, and bitter substances, but flavour discrimination which a function of olfaction is not possible’ (MedIndia.net).

What makes the sense of smell possible is a special lining in the posterior portion of the nose called the olfactory epithelium. Starting from this lining, signals ar carried via nerves to the brain which translates the scents into actual feelings and emotions. Given the importance of nerves, the potential damage to them may result in anosmia, as the brain may no longer be able to receive those inputs. 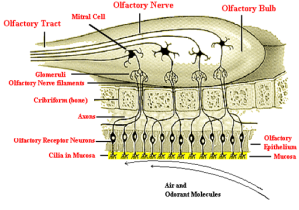 Normal aging might have an impact on your sense of smell, which may result in anosmia. Although this issue is more common than you may think, there are no specific treatments to cure it although the specific causes may be treated.

So why don’t you try to ask your partner, friend, child to play a game with you? Pick a few different scents and try to name them and see how you get on with that, it’s a great way to train your nose, test it and have fun 🙂