Over the last few months, we have been exploring the types of odours that are found in the natural world; and the environments where we like to meditate, seek peace and wellbeing, or simply feel good. Many of us like to be close to the sea. The sea shore can deliver some unique sensations, depending on the landscape, weather, tides and waters. An intimate, crescent shaped, sandy beach on a tropical island in the Indian Ocean might evoke feelings of peace, with dazzling and uplifting shades of turquoise in the sea and sky, the sounds of the water moving gently and softly over the sand, and the faint scent of a light sea breeze and tropical flowers in the air.  Compare this with the feeling you get standing at the edge of the Atlantic Ocean, on a long wide sandy beach, as the waves crash into the shore, their sound filling the air, you feel the sand shifting under your feet, the wind on your face, and smell and taste a salty sea tang – this is invigorating! The pebble beach of a Scottish sea loch is different again. This might be a good place to simply ‘be’; it may be tranquil and still, you can watch the rhythmical movement of the tide, and hear the sound of the water gently re-arranging the pebbles and the seaweed. The air might be cool, but fresh and clean, with, yes, a briny quality but something else too… the smell of seaweed. 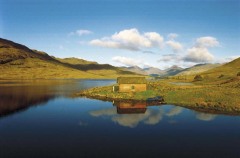 It is really very difficult to describe the smell of the sea, let along define what constitutes it. For many years there was a popular notion that we smelt ozone – a molecule comprised of three oxygen atoms – that was responsible for the clean and bracing air at the seaside. It is not healthy to inhale it in high concentrations, and it has a faint chlorine-like smell, we can detect it in the air after a thunder storm or heavy rainfall; some liken it to the smell around a photocopier. However, we now know that ozone has very little to do with the smell of sea air, instead we need to consider what is in the natural environment that contributes to the smell, or sensation. It could be sand, salt, sea creatures, or algae, plankton, ocean bacteria, and seaweed, and their metabolites, in a myriad of combinations.

One of the main contenders is actually a gas – dimethyl sulphide, or DMS. This is produced by ocean dwelling bacteria that colonise dying plankton and seaweeds, and in the natural environment it has a fishy, tangy smell. When the plankton or seaweed starts to decay, dimethylsulphoniopropionate (DMSP) is formed – this is a secondary metabolite in marine organisms such as algae. Just as in some terrestrial plants, these secondary metabolites are not part of essential growth and development processes, but are produced for other biological reasons. Plant volatile oils, which are responsible for the scent and taste of aromatic plants are secondary metabolites, perhaps formed to attract pollinators or repel predators. The DMSP is then converted by the bacteria into DMS, which is released into the seawater before escaping into the atmosphere. If plankton is under attack by a predator, the released DMS attracts crustaceans and seabirds which will prey on the plankton predator, thus saving the plankton. So, DMS could also be a type of pheromone that acts as an SOS signal, but by declaring ‘lunch is here – come and get it’! DMS attracts seabirds – it may be a homing scent, or an aid to finding food. It is also involved in cloud formation, therefore has a very important role in the ecosystem. We have a low olfactory threshold for DMS, it is often described as cabbage-like, and indeed it is released by several vegetables when they are cooked, before being oxidised in the atmosphere. It is also found in black truffles.

Seaweed will have a large part to play in the smell on the beach at the sea loch. In the traditional Scottish song, ‘The Road to the Isles’, we hear the lines inspired by the smell of the beaches on the North West coast, and its effect on the psyche of the people –

Tangle is seaweed, Laminaria digitata of the Laminariaceae family. It is very common in the British Isles and abundant on the west coast of Scotland. It is large, with olive-coloured leathery fronds, attaching to rocks that lie below the ordinary tides. It has a strong characteristic smell, more noticeable when the tide is out, or when it is washed up on the shore and begins to decay. 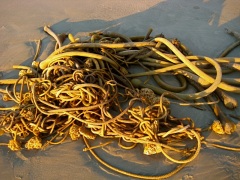 So, ‘extracting’ the smell of the sea is more or less impossible, but nevertheless there is a demand for natural and synthetic sea smells in perfumery and environmental fragrances. Perfumes have ‘fantasy’ marine themes – because most of us would not really want to smell of DMS, ozone or crustaceans… In this case, realism is not wanted, just a re-creation of the sensation. Many commercial perfumes with this theme include citrus notes, tropical flowers, fruits etc., to elicit the feeling of ‘cocktails on the beach’! However, according to the forum on Basenotes, there are a few fragrances that are not overly distracted from the salty, briny sea air theme such as Vetiver (Annick Goutal, which has a salty note), Brezza di Mare (i Profumi di Firenzi), Acqua di Sel (Profumum), Sandflowers (Montale) and The Different Company’s Sel de Vetiver, which is claimed to smell like salt drying on the skin after bathing in the ocean.

There is an ever-expanding array of aromachemicals that deliver aspects of the marine smell – algol, ambrate, aquanol, calone (more for a fresh water effect), decave, florazon, and maritime ozone are just a few examples. It is more difficult for the natural perfumer however. A tincture can be made of sand, seaweeds and shells that will give a ‘seashore’ element to natural fragrances, and there are absolutes obtained from a few species of seaweed. These include Fucus vesiculosus absolute; my sample has a salty, briny, almost savoury green/marine odour, with no tangy/fishy notes. In low concentration it can impart a salty, oceanic note that adds interest to green/fresh fragrances. It is used to very good effect in Trade Wind (Alec Lawless), to give the sense of being on an exotic island. Sometimes, juniperberry, oakmoss and vetiver can complement seaweed absolute – perhaps because of their ‘natural’ odours that give a sense of the outdoors.

Fucus absolutes may also have a role to play in aromatherapy and phytocosmetology – they have anti-inflammatory activity, and could be used to protect the skin from UV damage. Baylac and Racine (2004) investigated the potential for aromatic extracts to inhibit the enzyme human leukocyte elastase (HLE) in vitro.  This enzyme is important in the pathophysiology of inflammation, and is also involved in the degradation of the skin matrix proteins collagen and elastin. UV exposure will stimulate HLE activity, hence the ultimate effect of visible sun damage to the skin, including wrinkles and loss of elasticity. In this study, the absolutes, including Fucus, outperformed the essential oils in their ability to inhibit HLE.

This virtual trip to the beach and exploring its scents and sensations has really made me think about the relationship of the sense of smell with our other senses, and indeed the role of odours in the ecosystem. It has also highlighted the imaginative and creative side of perfumery, and the evocative fragrances that instil such good feelings in their users. It also reminded me of Heston Blumenthal’s innovative multisensory approach to gastronomy. He created a dish – ‘The Sound of the Sea’ – which combines our visual sense (the plate resembles a tideline, with flotsam and jetsam and beached greenery, and foam) with a soundscape of the seaside and a breeze scented with ‘sea odour’. He based the concept of sound paired with food on a study that had shown that oysters were rated as more intense and pleasant if consumed with the congruent sounds of the sea, than the incongruent sounds of a farmyard (Spence 2008).

And last but not least, I am off to smell the tangle o’ the Isles, next week, and I will certainly experience the beaches with an enhanced perspective.

Lawless, A. (2009) Artisan Perfumery or Being Led by the Nose. Stroud: Boronia Souk Ltd.

2 thoughts on “On the Beach”